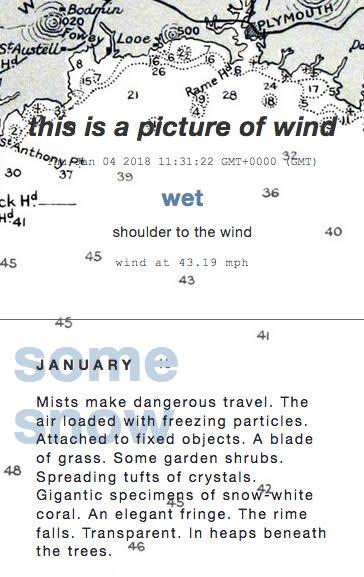 In 2017 IOTA Institute commissioned artists J.R. Carpenter (UK), Jennifer Chan (Ontario), and Liz Solo (Newfoundland) to produce new web-projects. The projects ran under the IOTA: DATA wing, and included a digital research publication on the topic of web-based art communities, digital aesthetics and the historie(s) of Net Art. This project was generously supported by the Canada Council for the Arts.

This is a Picture of Wind, by J. R. Carpenter expands upon a series of short texts written in response to the winter storms which battered South West England in early 2014, resulting in catastrophic flooding in Somerset and the destruction of the seawall and rail line at Dawlish in Devon. Following the news in the months after these storms, Carpenter was struck by the paradox presented by attempts to evoke through the materiality of language a force such as wind which we can only see indirectly through its affect. The artist began to explore weather in all its written forms.

Part poetic almanac, part private weather diary, and part live wind report for the South West of England, this work attempts to call attention to climate change by picturing through variations in language the disturbances and sudden absences left in the wake of wind.

This work is designed to be read on phones. It calls on live wind data. A new text was added for each month of 2018.

Initial research for this project was made possible by a Dot Award for Digital Literature, from if:book and the New Media Writing Prize. 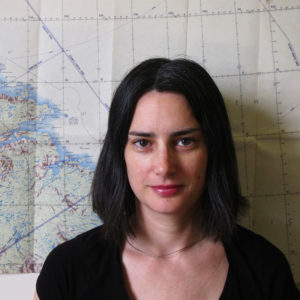