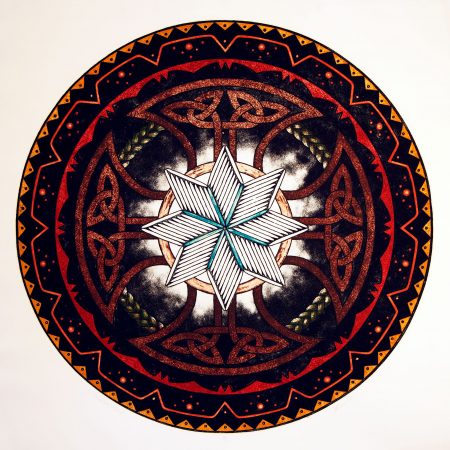 Of this land, Jerry Evans is a Mi’kmaq artist born and raised in central Newfoundland.  Graduating from NSCAD with a Bachelor of Fine Art in 1986 he has been creating and working  as a professional Visual Artist for over 30 years. In addition to his training in fine arts, Jerry has  been dedicated to the cultural preservation, reclamation, and continued growth of Indigenous  communities across Ktaqamkuk (Newfoundland) and the Big Land (Labrador). Jerry works  primarily as a painter and printmaker but also brings together his experience in film, design, and  traditional hand poke tattooing to reach beyond Western ideologies as a means of expression and  gift exchange. Jerry’s practice is deeply rooted in his Mi’kmaq heritage and his artistry comes  alive in the creation of his own regalia for powwow dancing and in his commitment to sharing  and learning with communities all over Mi’kma’ki.

Jerry coordinated and was principal researcher for the 1996 exhibition FIRST: Aboriginal Artists  of Newfoundland and Labrador, which presented works by Mi’kmaq, Innu, and Inuit artists  across Newfoundland and Labrador. Ever since, he has worked rigorously to bring these artistic  practices to the forefront and build the research around the traditional and contemporary art of  indigenous peoples from this land. While living in St. John’s, Jerry’s many years of work at St.  Michael’s Printshop as Master Printmaker and technician lead him to work alongside renown  Newfoundland artists such as Gerald Squires and Anne Meredith Barry. His prolific lithographic  work has been exhibited across Canada and is held in both private and public collections around  the world. Receiving grants from the Canada Council and the Newfoundland and Labrador Arts  Council, Jerry is working to develop and deepen his collaborative creative practice and research  creation in rural communities. 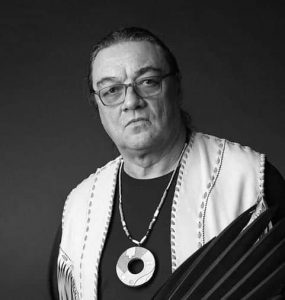