IOTA: Gallery Pop Up (Deux) is a pop up gallery that featured twelve Nova Scotia and New Brunswick contemporary artists, and two Halifax commercial art galleries for an online sale and pop-up sale event. Artworks were available for pre-purchase from May 1st to June 17th, 2017. All artists were featured for an interview as part of the Six Questions series, released every few days starting the first week of May 2017, and leading up to the live pop up event: June 17th, 2017 at the Anna Leonowens Art Bar + Projects.

In her botanical collages, Whetstone offers interventions on found vintage botanical prints. Playfully dystopian, Whetstone suggests a world where environmental degradation has spawned new flora that incorporate textile, print ephemera and other detritus as a type of genetic modification. The new flowering species speak to the resilience of Nature. In the spirit of the scientific accuracy of historical botanical drawings, Whetstone asks us to engage with the spectacle of the strange new flora while contemplating our own fascination with the exotic in Nature – as un-natural as it may be.

The Red Black White collage series is a project exploring the common language of aesthetics and design at play in the art works. With a restricted palette, the works are intentionally simplified to focus on the dynamic interplay of colour and shape. These collages, made with cut and torn paper and India Ink, respond to European Modernism, 20 century design aesthetics and the resurgence of abstract painting in contemporary practise.

Terri Whetstone was born in Edmonton, Alberta where she studied art history, literature and painting at the University of Alberta. She previously studied Interior Design and Photography in college. As an emerging artist in Edmonton and Toronto, Terri exhibited photo-installation and photomontage works as well as paintings. After a hiatus from the studio, Terri returned to painting in 2006. More recently she began making collages which have recently been exhibited at Hermes and The Craig galleries in Halifax, and at ArtsPlace in Annapolis Royal.

Terri’s studio is located on the south shore of Nova Scotia, where she has lived for 25 years.

Can you elaborate on our discussion of ‘magazine culture’, how the ripping, pinning up and cutting out of magazines have informed the visual vocabulary of your practice?

We have to remember pre-1990 personal computers did not exist in the average home. I grew up with print media, TV, movies. Whether it was the Saturday magazine that came with the weekend newspaper, or a magazine my parents subscribed to (or later spending my own hard earned cash on magazines) print books and magazines were the most accessible source of imagery. Magazines were an inexpensive way to experience and learn about the broader world. As one looked through them, it seemed only natural to sometimes tear out and collect those images – trying to grab onto a piece of that larger, more exotic world. Sometimes an entire edition – like Vogue’s enormous Fall edition – would become, for lack of a better word, a reference book and kept for many years if it was a particularly exciting one.

Magazines were also a source of “what was happening”. I first learned of Frida Kahlo and Georgia O’Keefe from articles in magazines. My first encounter with Punk was via print media before I had ever heard the music. Material culture, of which magazine culture is a part, has informed much of my work.

Is scale an important element of your work?

Scale is central to both the collages and paintings. As a painter I prefer to paint large canvas stretched to the wall. The act is physical and sensual. Nothing like raw canvas to turn me on! The relationship to a large artwork, as you know, is through one’s body. We experience our self in front of an artwork and in relation to it. The small collages are a different experience and I’m often concerned to not venture too far into the “precious”.

I make the small collages on a table, as opposed to the wall. I am able to manipulate the placement of visual elements very quickly, composing from a collection of source paper materials I’ve prepared. There is less at risk, so there is a kind of freedom for exploring and composing. And there is a tactile difference – finger-tip manipulation versus brushes and gesture.

You spoke to me about two Japanese woodcuts you received as a teenager as a gift that informed the delicate layering of patterns in your work such as the Cartouche painting series for example, a visit to Mexico as a young woman, your background in interior design, and studies in abstract painting. How then, do these pivotal markers in the development of your techniques manifest themselves in your work and negotiate between formalist design and expressionist feeling? Is this a form of rebellion?

I suppose my interest in folkloric patterns and objects pushes against my education in European Art History and painting techniques… that dialectic of high art versus folk art. But I think my interest in the things people make who wouldn’t be considered “artists” comes more from my own experiences as a child and teenager sewing and doing textile crafts. Later, I was very influenced by feminist artists’ reclamation of women’s craft as art. Now we have textile departments in art schools all over the continent. Those did not exist when I was in art school. If they had, my development as an artist would probably have been different.

My education in non-representational/colour field painting grounded me in the language of aesthetics and design. That said this language was seeded earlier via studying mid-century/modern interior design, collecting textiles, and through looking at photography and watching films. Formalist abstraction is rooted in expressionist efforts to create or foster a “feeling”. I am not trying to express a feeling or spiritual condition as the American Abstract Expressionists were (Rothko, Motherwell, et al). I am first and foremost composing with colour relationships and geometric forms and patterns. I am then interested in leaving things a little open-ended (no titles for example) so viewers can bring their own associative ideas to, and impose their own narratives, on the work.

Is there a relationship between your collages and paintings, either in practice or theory or both?

There is a connective aesthetic language shared by the collages and paintings.  It is there in composition decisions. And, overall, they are linked by process. My process is closely linked to automatism – the idea that art might be a manifestation of the artist’s subconscious – and in that subconsciousness mind there is a storehouse of graphic imagery, art history, literature, patterns, symbols,  – for me, also music – and god knows what else! There is a composing framework – often just a single idea or motif – and from there the work proceeds.

Your new trichromatic Red, Black, White collage series are much more minimalist and reminiscent of design meant to evoke symbolism (reminiscent of flags for example). Why the need to simplify your collages by removing much of the pattern that often leads your other works?

With this series I am using a very limited but dynamic palette of red, black and white. That colour dynamism with geometric shapes produces very graphic images. To me, they have the look of Suprematism, a Russian art movement founded by Malevich around 1914 that used basic geometric shapes with limited colour palette as the basis for non-objective abstraction. The movement influenced (and continues to influence) art, graphic design and architecture including the development of Constructivism and the Bauhaus. For me, the influences of these three movements probably flow as an unconscious lexicon, given the importance of graphic print material and design in the overall development of my visual vocabulary. This association was not intentional. Of course the abstraction of Suprematism is something I know from studying art history and the culture of art history is always in my head.

This series really took off immediately following the opening of my last exhibition. Over the last year some of my paintings were becoming more abstracted. It appears I have a need to simplify after a decade of imagistic and ornamental work. The layering and colour relationships remain, but the motifs are all but gone. In many ways the Red Black White collages are a return to my earliest paintings – dynamic geometric shapes playing over a field of thinly stained canvas. Sometimes we go back to the beginning to move forward….

I am going to investigate using India Ink for drawing on thin acrylic stains on large canvases. It’s a bit of taking the last series of collage (Red Black White) and following this simplification onto a scaled-up surface. But that is just the jumping off point – the paintings themselves will point the way. And continuing with collage. The collages are the ideal space to experiment with reduction and abstraction. They are incredibly satisfying to make. 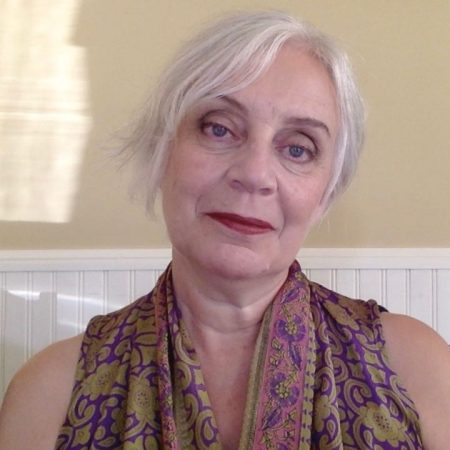 Terri returned to painting in 2006. More recently she began making collages which have recently been exhibited at Hermes and The Craig galleries in Halifax, and at ArtsPlace in Annapolis Royal.