2007-2013 The Ledge Suite: This series of works was created within a digital matrix. The prints are a restoration, reconstruction and representation of the decaying pages of an industrial age accounting ledger that was passed on to two generations of my family dating between 1895 and 1933. In their possession as children and teens the tome became a scrap and scribble book that I interpreted as a readymade metaphor for the weathering ideal of capitalist democracy, overwritten with history and popular culture ultimately hiding the corrupt truth of self consuming systems. The book was simultaneously a beautiful and fragmented look at the whims of my great grandmother Almina and the transcribed poetry and math musings of my grandfather Jack Bovey as a small boy.

My task was to continue to add to the book using the technologies of the present. The reconstructions revealed many themes that are ever-present today. Environmental degradation, questions of power, anecdote, mental stress due to the weight of war and continual serendipity between image and context are a few of the themes. Some of these books became animated in a series of three back projected print and video installation works created specifically for the exhibition titled “Last Frontier” curated by Sarah Filmore in 2011at the Art Gallery of Nova Scotia. The three works together suggest the cycle of flood and famine, the beauty and despair of time represented as decay and containing the marks of children alongside the present and pasted in popular topics of the day.

All prints are first in an edition of 7.

Mark Bovey examines the world through the lens of printed histories and through the many forms of expression the medium offers, from the directness of a carved relief block to the refined output of the computer matrix. He teaches from the perspective of the mediums expressive and theoretical potential, with initial emphasis on learning the skills in introductory courses. Senior level students are encouraged to explore context, theory and more complex formal outcomes as they develop a personal language through printmaking.

Whether working with traditional means or new media installation, the printing matrix provides a way of collapsing time as he explores ideas of information entropy, restoration, transfer, deferral and recombination. His research interests explore spaces that exist in the “between”. Common topics include the history of relationships such as scientific and spiritual, individual and universal, real/imaged and simulated all of which are integrated into visual forms that the viewer is invited to traverse.  www.markbovey.com

Who are your artistic influences?

There are a many. I always seem to come back to artists who’s work is concerned with the human condition. Antoni Tapies and Francesco Clemente are long time influences. Tapies for his stick in the sand politically directed expressionist prints, paintings, and sculptures that tell the storey of the Catalonian persecution in fragments and remains, and Clemente for transcendental poetic narratives. I have always admired the pure metaphysical forms of Anish Kapoor compared to Rauschenberg’s desire to reflect the current condition in his pop combines. My interest really lies in asking the bigger questions about transferred knowledge and connectedness through image compositions and drawing. Metaphorically I want to make work that seems to hint at the theory of relativity combined with quantum mechanics, works that combine evidence of the individual with the universal simultaneously.

The digital age has brought on too many online archives to count, some focusing on information that may seem trivial, even uncircumstantial to our everyday or of what constitutes a history. Do you think collections should be unedited?

For an artist….yes… the detritus on and of the internet seems to have replaced or runs parallel to other types of heaps… the mental scrapyard the dump.. the grab bin. Art can emerge from anywhere. I am very interested in serendipity and chance. We seem to live in ever unedited times and I enjoy finding ideas in the pile, that coalesce by sifting through. I think it is up to the historians to determine the piles as they always have. It is definitely harder to do in some respects now but perhaps not.

A contemporary approach to the theory of becoming is described in Deleuze and Gattari A Thousand Plateaus: Capitalism and Schizophrenia in which they wrote, “The self is only a threshold, a door, a becoming between two multiplicities”[1]. In other words, becoming is a “non-linear dynamic process of change”[2], where all moments are in a mode of productive change and are part of what constitutes an event. You write that you are interested in what lies between “this place and that” and allow the viewer entry to the work between these two sites. Can you speak to what this in-between place represents for you in your work, and perhaps in the moment that revised information becomes a new truth?

Yes.. of course… Today we are asked ever more to straddle many “betweens” in a single day. In cinema it is referred to as the cinematic cut. It involves a fissure in the sense of place and or time and can be very dislocating. I think we are living in an increasingly more fractured visual and mental landscape. This is of course supported by capitalist ideals of individualist thought and I think artists can make sense of this and make work that reveals this or conversely combats it. I think this is why I love Tapies and Kapoor. My education was partly grounded in classical ideas of composition, ideas we associate with music, but I try to locate connections in the seemingly disparate fragments not only of images but also of technologies. At a base level it is very simple. A search leads to the sense of discovery that leads to ideas that traverse time. The modes of expression in the Ledge_ Suite are ever-present embedded in how the images were printed. This idea underlies how the images might relate thematically through time. This means that context is continually needed to understand the fullness of possible meanings. The works still require viewers input and interpretation.

What are your thoughts on digital chronology rather than digital serendipity in the archive?

Chronology doesn’t concern me… I wasn’t interested in preservation, or order but more of the poetic possibility…. The book was not chronological beyond the numbered pages… it really seemed to me to reflect the nature of the contemporary condition and I tried to preserve that sense in my additions. Remembering that it was the musings of children on top of the matter of fact business of industry which were definitely separate modes of experience and thought. The one place it came together was when my grandfather practiced his math.

You are currently working with stone lithography and etching processes in your body of work World Machine. Can you write about the relationship of the object to the use of referential images used in your work?

Yes of course… The stone and plate are sites for collection of ideas born in the images. They really aren’t different than the digital works. The means of execution has more to do with the kind of space or perhaps the Trompe-l’œil potential. The lithograph is more autographic so when I was making the lithos I wanted to create Faux Blackboards, like in the tradition of Cy Twombley but with more directed information… hinting at the blackboard as a site of knowledge and information/disinformation and the medium of aquatint etching can create incredible texture in layers of space. While litho is naturally a surface, etching is a spatial landscape for image or drawn elements to reside.

How does spirituality enter your work process, especially considering what you’ve called “the human endeavor”, that your source material comes from early scientific or medical books that are themselves rooted in early natural and human “discovery”.

Spirituality is a tricky word, especially in an art context now because of its association with religion. I believe that connections can be found through image combinations and I enter the process with very little pre-conception. My work comes via documented histories, not always scientific although science is predicated on the act of categorizing data so there is an inordinately vast amount of this kind of information of record, printed from the 16th century forward. I am also interested in how the information was recorded as a visual quality, and how the qualities of expression revealed the beauty or dimension of the findings or the degree to which there was a human need to record the world. I suppose they are a record of desire for knowledge, which is a human need and often the need requires trust that something will be found.

I am interested in connectedness, shared knowledge and cross-pollination. This can take place and have authority through transformation through the matrix, the etching plate, stone or digital file. The history of printmaking is the history of connectedness and discovery. My process really involves intermingling these historical referents to arrive at an image and drawing combinations that resonate formally and in some cases find grounding in contemporary concerns. The digital output, analog print or gallery installations also define the work contextually.

So when I speak of spirituality it is not the ecclesiastical definition but rather a belief that there are connections to locate and that the journey will lead to works that are open and interpretable.

I am interested in continuing all these various trajectories, using traditional and new means. The methods as they always have are central to the ideas or appropriate for the formal aesthetic goals of the work. In 2010, I began making installations that pulled the layers apart and animated aspects through projections. It has exciting potential and technologies are making it possible. At present I am reworking the Ghost Ship installation I first showed in 2013 in Hungary. 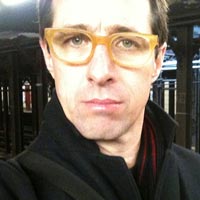 Whether working with traditional means or new media installation, the printing matrix provides a way of collapsing time as Bovey explores ideas of information entropy, restoration, transfer, deferral and recombination.