Bennett’s work is derived from a combination of observations and influences from historical and popular culture, new media, traditional craft, political issues, and his own cultural practices. Through the processes of sculpture, digital media, installation, endurance performance, sound installation and various others, he strives to push boundaries and play with the ideas of re-appropriation, reclamation, participation and the artifact within traditional indigenous and contemporary art forms. With upcoming exhibitions nationally and internationally Jordan is creating new works spanning various mediums and concepts with a particular focus on exploring notions of the living artifact.

Jordan Bennett is a multi-disciplinary visual artist of Mi’kmaq heritage from Stephenville crossing Newfoundland. Over the past years Jordan has shown extensively in Canada and abroad, in venues such as the Museum of Art and Design, NYC, NY; Museum of contemporary native arts, Santa Fe, NM; Project Space Gallery, RMIT, Melbourne, AUS; The Power Plant, Toronto, ON; Musée d’Art Contemporain de Montréal, Montreal, QC; Mcmichael Art Gallery; and Kleinburg, on, the Vancouver Art gallery, Vancouver BC amongst many others. Jordan recently completed a commission through imagineNATIVE and the national film board of Canada undertaking a large scale installation and short film titled “ice fishing” which premiered at the 2014 imagineNATIVE film and media arts festival and has been officially selected to exhibit and represent newfoundland and Labrador in the 2015 Venice Biennial. Jordan has recently been long listed for the 2015 Sobey Art Award, presented with the newfoundland and Labrador arts councils artist of the year, received the excellence in visual arts Newfoundlands’ large year award, and named as one of the artists in the 2014 Blouin Artinfo’s top 30 under 30 in Canada.

After pioneer artists such as Daphne Odjig, Alex Janvier, Rebecca Bellmore, and Jerry Evans, you’ve talked about wanting to explore your indigenous identity in the exhibition space. If we view the gallery as an institutionalized and colonial space, do you engage with this type of space strictly as interventionist?

Yes and No. I feel that the gallery has come a long way since the early work of advocates and artists like Odjig and Janvier. Their work was not wanted in these spaces. They fought everyday to get their art onto those walls; to decolonize the space and to show that what Indigenous artists were making was as real and powerful as whatever else was being exhibited at that time. In my opinion it was and still is. I explore my indigenous identity everyday through talking to family, friends, and colleagues. I have even been honoured to spend time with all of these artists listed above, getting to know them on a personal level. I create for my community, my family and myself. If that’s what makes it onto the wall of an exhibition space its because of the hard work of these trailblazers. I hope that one day the gallery and other institutions will embrace Indigenous methodologies, knowledge, and perspectives –– not as intervention but included as a way of knowing.

Your performances take you outside of the gallery space at times, can you write about your decision to exit the space or to begin a performance outside going into a gallery?

For me starting a performance from outside a designated performance space is a way to break away from what most galleries see as a safe zone. The gallery is understood to be an acceptable space where the abstract or absurd can occur and once you take that into the open air it tends to challenge the ideas of the artist, art, reality and the everyday. In the gallery it’s a performance but out in the open it can be so much more. It can be protest, rebellion, an outburst, for me it’s all these things and also a means of communicating with those who don’t get a chance to visit galleries or have no interest in doing so.

Is institutional critique an albatross for you in your practice? Are you compelled to enter into that discussion as an artist who is also of Mi’kmaq heritage?

Sometimes, it depends on the audience, the institution, the audience in the institution, and the institution in the audience. I think I am automatically entered into that discussion as an artist of Mi’kmaq heritage whether I want to be or not. The majority of gallery goers always want to know how exhibiting in a contemporary gallery relates to your heritage if you’re Indigenous. It seems as though it’s hard for some to see the “art” without asking about the “Indian-ness”.

The ‘C’ word, Community, had been overused so as to render it non-descript. What is the role of community in your work?

Community is not a separate entity within Mi’kmaw world view. It’s the purpose of everything, its the purpose for creating and sharing. In saying that, it plays a big role in my work. When I do work about my community I go to my community or I go to a community in which I was invited. I like to spend time developing a sense of trust and to create a connection with others. I have been fortunate to spend time working with Indigenous youth, throughout Newfoundland, Labrador, Manitoba and most recently in Prince Edward Island. I am always honoured to return to my home community to share and learn with youth as I learned from other artists and elders in my community growing up.

In your new multi-layered works Bands of Bark; Sewn with Cotton Thread, & The Black Quills Extend, you’ve been looking through drawings made by Shanawdithit, who is known in Newfoundland as the last living member of the Beothuk people and as a “princess of Tera Nova”, and reinterpreting them in various forms such as silk screening and tattooing. What is the relationship of the original drawings, to the materials and process you are using today?

The original drawings acted as a starting point. Just before I left to move to Kelowna, BC I felt as though I needed something to ground me back home in Newfoundland, a reminder of where I’m from and of the generations that came before me. As a result of my longing for place and memory I got two of Shanawdithit’s drawings tattooed on my forearm. Shanawdithit drew these images, maps and memories in the final few months of her life, and in my opinion as a means to preserve some visual knowledge and memory of her people, she was 28 when she drew these and I am 28 now. The new works created are meant to represent a meeting ground for both Mi’kmaq and Beothuk cultures to flourish and co-exist as they did centuries ago in Newfoundland. The images are composed of my interpretations of Mi’kmaq porcupine quillwork designs combined with various patterns found on Beothuk artifacts as well as Shanawdithit’s drawings.

These works are a combination of silkscreening and hand painting with acrylic. The Mi’kmaq porcupine quillwork designs are derived from drawings done by Mi’kmaq historian and ethnologist Ruth Holmes Whitehead who had visited and documented Mi’kmaq, Beothuk and Maliseet artifacts outside of North America to compile various publications though Nova Scotia Museums. I was thinking of the process of documentation and how her black and white drawings of these objects existed as copies, which were intern copied into publications and distributed widely, hence my choice of silkscreening. Within each of her descriptions of the quill works there was an in depth analysis of the colours used to create these objects, I wanted to honour the time put into the dying of each the porcupine quills by painting each print by hand, making them unique and cared for individually, not just a copy of one another.

It has been a busy year so far and it seems to be keeping that way! I just recently returned home from exhibiting at the 2015 Venice Biennial in Venice, Italy and another show in Paris, France. I recently completed the first year of my MFA at the University of British Columbia Okanagan and am currently on residency and collaborating with my wife and artistic partner Amy Malbeuf at the Santa Fe Art Institute in Santa Fe, NM. I have a few shows coming up in the next year including a solo exhibition opening at Gallery 2 in Grand Forks, BC titled Billy Jacking. I will also be heading back out east to Newfoundland and other parts of the maritimes to conduct some community based research. This research will be the basis towards creating new artworks which will be part of my MFA thesis exhibition at the Vernon Public Art Gallery in 2016. 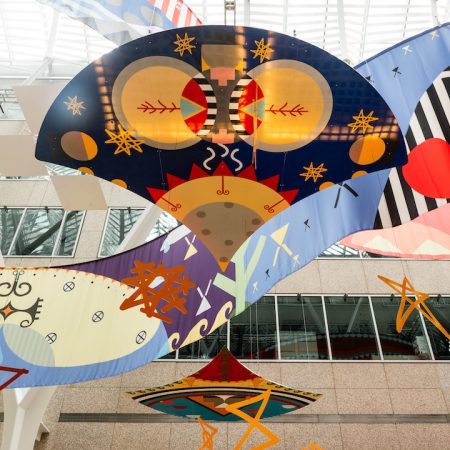