Eyland began the ongoing installation File Card Works Hidden in Books at the Raymond Fogelman Library at 65 Fifth Avenue, New York, in 1997. The work was sponsored by the New School University (formerly the New School for Social Research). He was assisted by curator Kathleen Goncharov, who organized a reception, and Fogelman librarian Gail Persky, who gave him formal permission to do the work. He continued to hide hundreds of original drawings in Fogelman books until 2005, when the new librarian asked him to stop: “We pay people to take out what people like you put in,” he said. Eyland plans to continue this work when he again gets formal permission from the Fogelman administration. The drawings below were hidden in Fogelman books in 2003.

Cliff Eyland is a painter, writer and a curator. He studied at Holland College, Mount Allison University, and the Nova Scotia College of Art and Design. Since 1981, he has made paintings, drawings, and notes in an index card format — 3″x5″ (7.6×12.7 cm).

Eyland has shown his work in public and secret installations in art galleries and libraries in Canada, the United States and Europe. Exhibition highlights include solo exhibitions at the Art Gallery of Ontario in Toronto, the New School University in New York, the Winnipeg Art Gallery, Struts Gallery and Gallery Connexion (both in New Brunswick), the Muttart (now the Art Gallery of Calgary), the Art Gallery of Southwestern Manitoba, and in Halifax at: the Art Gallery of Nova Scotia, eyelevelgallery, Saint Mary’s University Art Gallery and Dalhousie Art Gallery. Group exhibitions include shows at the National Gallery of Canada, in Florence, Italy, Manchester, England, and Lublin, Poland, among others. In 2003 Eyland was shortlisted for the national RBC/Canadian Art Foundation painting award. Eyland’s ongoing installation at the Raymond Fogelman Library at the New School University in New York City was regularly updated from 1997 until 2005. His permanent  installation of over 1000 paintings at Winnipeg’s Millennium Library opened in 2005.

You’ve said that you would think often “about trying to reconcile conceptual art and painting”. Has this instinct changed over the years, especially in looking at your collaborative projects, where you work with artists of other disciplines such as in the 2010 Wall Books with filmmaker Guy Maddin or for Recent Posters with Carl Matheson (2009-2010)?

There was no real war between conceptual art and painting, at least at NSCAD, but it took many of us a long time to realize that. In 2010 I began to make PDF/print-out books because I had a health scare so I wanted to get things in order – to document my life — but of course what happened was that I mostly made more new art.

Do you have curatorial influences that have shaped your approach to working with artists? Can you write about the importance of [or the contention surrounding] curating?

Being a curator and an artist was tough when I started in the early 1980s, and maybe it still is. Conceptual art made the distinctions nonsensical for me early on, but there are still problems with mixing up the two and I understand the ethical problems that are inevitable with some projects. I have been what is called an institutional curator, and there are lines that you must not cross when you work for public institutions, the main one being that what you curate can’t be your own “art” if you get my drift. This is a complicated question.

Most of your works are untitled, and you have hidden drawings in library books for example in File Card Works Hidden in Books since 1997, where you received permission from the Raymond Fogelman Library to do so until the new Director asked you to cease in 2005. Your file cards are reminiscent of collectors’ edition pack, but the ways in which they are given to their owner are often by chance rather than by glorifying an object for the collector. How does your work operate in a secretive, private space? Why is the mystery of who finds it significant, if at all, to you?

I loved the idea of secretly giving away art in New York City. I even had a library patron ask me at the Raymond Fogelman if he could buy a work and I bravely (I thought) said no. I love the idea of book marginalia and of finding things in books. I get emails form people who have found my things and I’m delighted by them. I got one from a librarian who was processing books that had been de-accessioned for the Fogelman Library, which was both thrilling and sad.

I should be clear, though, my works on paper are either hidden in books or sold for $50 each – a small sum, I think, but my paintings of the same size sell for a lot more – $350. The vale of a work does not change that much if you sell it or give it away. It is possible to flood the market, but when you get down to prices like these, it’s hard to think that they could get lower – although it’s possible! I remember that story about Duchamp signing as many posters as he could for his Pasadina retrospective with the logic that the more he signed the less valuable each one would be.

You have been intervening in libraries since your early file card works at NSCAD, and most recently with the Halifax Central Library where a large installation of your paintings was inaugurated in 2014. Can you write about the relationship you and your art have to libraries, in your presentation, and infiltration of art within the methodology of categorizing information on art?

This question really interests me. I’ve thought of my works in libraries as “illustrating the library”: there is always something in the library that can be illustrated by one of my untitled paintings or drawings. It gets “Borgesian” instantly, that is, the practice sets up a near endless set of possible references or referrals, like a story by Jorge Luis Borges. An image that I put on a wall in a library can be connected with many texts and images in the library.

I’m not healthy so I still want to get my stuff together, for example by donating works to museums and outlining autobiographical materials, etc. My website is extensive, but I’d like to make it more or less complete. I’ve made a lot of art but I’ve also written about many other artists and I’d like to put all of that in some legible form. Of course I can’t help but continue to make more art. 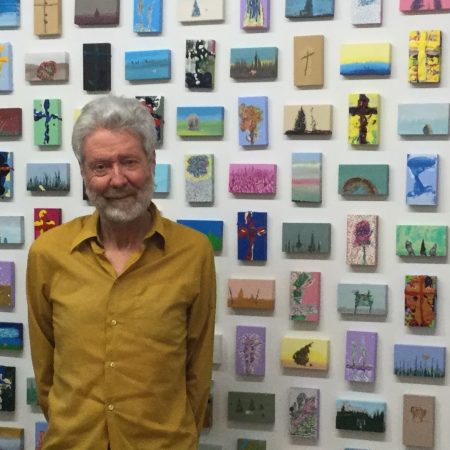 Cliff Eyland is a painter, writer and a curator. He studied at Holland College, Mount Allison University, and the Nova Scotia College of Art and Design. Since 1981, he has made paintings, drawings, and notes in an index card format — 3″x5″ (7.6×12.7 cm).